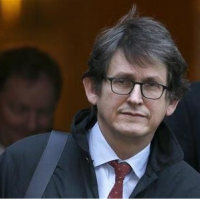 The editor of The Guardian Alan Rusbridger leaves Downing Street in London, December …

WASHINGTON (Reuters) – The editor of the Guardian, a major outlet for revelations based on leaks from former U.S. intelligence contractor Edward Snowden, says the British government threatened legal action against the newspaper unless it either destroyed the classified documents or handed them back to British authorities.

In an article posted on the British newspaper’s website on Monday, Guardian editor Alan Rusbridger said that a month ago, after the newspaper had published several stories based on Snowden’s material, a British official advised him: „You’ve had your fun. Now we want the stuff back.“

In the building’s basement, Rusbridger wrote, government officials watched as computers which contained material provided by Snowden were physically pulverized. „We can call off the black helicopters,“ Rusbridger says one of the officials joked.

The Guardian’s decision to publicize the government threat – and the newspaper’s assertion that it can continue reporting on the Snowden revelations from outside of Britain – appears to be the latest step in an escalating battle between the news media and governments over reporting of secret surveillance programs.

On Sunday, British authorities detained for nine hours the domestic partner of Glenn Greenwald, a Guardian writer who met face to face in Hong Kong with Snowden and has written or co-authored many of the newspaper’s stories based on his material.

The Guardian reported, and UK authorities subsequently confirmed, that David Miranda, Greenwald’s Brazilian partner, was detained by British authorities under an anti-terrorism law as he was in transit from Berlin to Brazil and was changing planes at London’s Heathrow Airport.

One U.S. security official told Reuters that one of the main purposes of the British government’s detention and questioning of Miranda was to send a message to recipients of Snowden’s materials, including the Guardian, that the British government was serious about trying to shut down the leaks.

White House spokesman Josh Earnest told reporters on Monday that while the United States did not ask British authorities to detain Miranda, British officials had given the United States a „heads up“ about the British government’s plan to question him.

Rusbridger, in his article on the Guardian’s website, said that despite the destruction of the computers in London, he told British officials that due to the nature of „international collaborations“ among journalists, it would remain possible for media organizations to „take advantage of the most permissive legal environments.“ Henceforth, he said, the Guardian „did not have to do our reporting from London.“

A source familiar with the matter said that this meant British authorities were on notice that the Guardian was likely to continue to report on the Snowden revelations from outside British government jurisdiction.

Rusbridger said that in meetings with British officials before the computers were destroyed, he told them the Guardian could not do its journalistic duty if it gave in to the government’s requests.

In response, he wrote, a government official told him that the newspaper had already achieved the aim of sparking a debate on government surveillance. „You’ve had your debate. There’s no need to write any more,“ the unnamed official was quoted as saying.

During Miranda’s trip to Berlin, which the Guardian said it had paid for, he visited with Laura Poitras, an independent film-maker who was the first journalist to interact with Snowden. Poitras co-authored stories based on Snowden’s material for the Washington Post and the German magazine Der Spiegel.

Greenwald told the New York Times that Miranda went to Berlin to deliver materials downloaded by Snowden to Poitras and to acquire from Poitras a different set of materials for delivery to Greenwald, who lives with Miranda near Rio de Janeiro.

Greenwald said British authorities seized all electronic media, including data memory sticks, which Miranda was carrying. But Greenwald told the Forbes website that „everything“ Miranda had „was heavily encrypted.“

Greenwald did not immediately respond to an email from Reuters requesting comment.

While British authorities confirmed that Miranda had been detained under an anti-terrorism law, they did not further explain their actions. Brazil’s government complained about Miranda’s detention in a statement on Sunday that said the use of the British anti-terrorism law was unjustified.