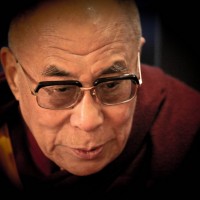 The (Justifiably) Angry Marxist: An interview with the Dalai Lama

In April 2006, the Japanese cultural anthropologist Noriyuki Ueda met the Dalai Lama for two days of conversation in Dharmasala, India. The discussion, recently translated from the Japanese text, covers such topics as the usefulness of anger, the role of compassion in society, and social and economic justice. „I believe that Buddhism has a big role to play in the world today,“ Ueda tells His Holiness, „and I am impatient because Buddhists don’t seem to realize that.“ In this interview, Ueda offers us a rare peek into the the political and economic mind of one of the world’s most famous spiritual leaders.

I would like to discuss whether it is possible to construct an altruistic society, in which people take care of and help each other. Our modern educational system fails to provide sufficient education about compassion. The time has come to transform this whole system. Society is formed through its educational system, but the educational system does not transmit the deeper human values of compassion and kindness. Then all of society lives with this false view that leads to a superficial life, in which we live like machines that don’t need affection. We become part of that. We become like machines. That is because today’s society is based on money. A society that is based on money is aggressive, and those with power can bully and behave cruelly to others. This situation produces growing social unrest. A society that depends on money has problems that reflect its beliefs.

In reality, affection and compassion have no direct link with money. They cannot create money. Therefore, in a society in which money is the priority, people don’t take these values seriously anymore. People in positions of leadership, like politicians, have emerged from within a society that depends on money, so naturally they think like that and lead society further in that direction. In this kind of society, people who value affection and compassion are treated like fools, while those whose priority is making money become more and more arrogant.

I spent last year at Stanford University in California, in the heart of Silicon Valley, where many wealthy people live. Yet in spite of their apparent wealth, people there don’t seem to be truly happy. Many suffer from stress and anxiety. This reality raises complicated questions for me. Material wealth does not necessarily bring true happiness. On the other hand, while it is good to be happy in the midst of poverty, poor countries have big problems.

On a macro scale, we must bridge the gap between rich and poor. Buddhists with deep faith seem happy within their communities, yet in the wider world that gap keeps getting bigger. People who are filled with affection and kindness and are not swept away by material desires are getting poorer, while those who are frustrated and recklessly pursue selfish benefits instead are getting richer. What do you think about this point? That is a different factor. Europeans had to think about industrialization and technology in order to survive. Countries like Portugal, Spain, England, France, and Belgium became colonial powers. These small countries became industrialized, obtained raw materials from other lands, used them to make products, and then began to sell those products back to other countries.

Eventually part of the population in Asia received a Western-style education, adopted a Western way of thinking, and imported Western technologies, which led to trade with Western countries. European colonization allowed business to expand to an international level. In Asian countries, one part of the population adopted Western ways of doing things and became rich, while those who still followed an ancient way of life remained poor. At a global level, the standard of living in industrialized nations rose to a much higher level than that of the exploited nations, and these nations became much more economically powerful. In those exploited nations, the few individuals who had the opportunity to adopt a Western way of life became wealthy, while peasants and villagers who preserved the same lifestyle they had for thousands of years remained poor.

One thing that particularly interests me is your use of the word “exploitation.” This is the second time you’ve used that word, and I am surprised since it is a left-wing, Marxist term. It’s true. I am also an exploiter. I hold the position of a high monk, a big lama. Unless I exercise self-restraint, there is every possibility for me to exploit others.

On my first visit to Mongolia, they arranged a tour to various institutions and a museum. At the museum, I saw a drawing of a lama with a huge mouth, eating up the people. This was in 1979, when Mongolia was still a Communist country. The Communists said that religion was a drug, and every religious institution was an exploiter. Even monks were exploiters. Even donations distributed to the monastic community were considered to be a form of exploitation.

When I came to the spot with that picture, the officials were a little bit nervous. I deliberately looked at it and I said, “It’s true.” Of course, I agree. I am not only a socialist but also a bit leftist, a communist. In terms of social economy theory, I am a Marxist. I think I am farther to the left than the Chinese leaders. [Bursts out laughing.] They are capitalists. [Laughs again.]

That’s true. [Bursts out laughing.] In the real world exploitation exists, and there is a great and unjust gap between rich and poor. My question is, from a Buddhist perspective, how should we deal with inequality and social injustice? Is it un-Buddhist to feel anger and indignation? When faced with economic or any other kind of injustice, it is totally wrong for a religious person to remain indifferent. Religious people must struggle to solve these problems.

Here the issue is how to deal with anger. There are two types of anger. One type arises out of compassion; that kind of anger is useful. Anger that is motivated by compassion or a desire to correct social injustice, and does not seek to harm the other person, is a good anger that is worth having. For example, a good parent, out of concern for a child’s behavior, may use harsh words or even strike him. He may be angry, but there is no trace of any desire to hurt him.

Japanese temples often enshrine the fierce manifestation of [the Buddhist deity] Acala. [Opens his mouth to make a face like an angry deity.] But Acala has that fierce expression not out of hatred or a desire to harm sentient beings, but out of concern for them, to correct their mistakes, like a parent’s desire to correct a child’s mistakes. As you rightly mentioned, anger brings more energy, more determination, more forceful action to correct injustice.

Of course, it should be accompanied by compassion. Yes. The deep motivation is compassion, but it takes anger as the means to accomplish its ends.

To use anger as a motivating force, should we transform it into another state, into something positive? Or should we maintain it as it is? The question is a person’s state of mind or the motivation that causes the action. When we act, that act arises out of a cause that already exists in us. If we act when our inner motivation is hatred toward another person, then that hatred expressed as anger will lead to destructive action. This is negative action. But if we act out of consideration for the other person, if we are motivated by affection and sympathy, then we can act out of anger because we are concerned with that person’s well-being.

In this way, the parent acts out of concern for the children. If a child is playing with poison, for example, there is a danger that he may put it in his mouth. That is an emergency situation, and the parent may shout or strike the child’s hands, but only out of genuine concern for him, to stop him from doing something dangerous. As soon as the child drops the poison, the parent’s anger stops. That is because the anger was directed toward the child’s actions that could harm him, not toward the child himself. In such a case, it is right to take the necessary measures to stop the action, such as anger, shouting, or striking. If the anger is directed toward the person, if there is ill feeling toward the person, then that feeling will persist for a long time. When someone tries to harm you, or you feel that you have been harmed, then you have a negative feeling toward that person, and even if he is no longer acting in that way, you still feel uncomfortable toward him. In the previous case, as soon as the child’s wrong action stops, the parent’s anger goes away. These two types of anger are very different.

I see. Should one truly continue to harbor a feeling of anger? Of course. That anger is directed toward the social injustice itself, along with the struggle to correct it, so the anger should be maintained until the goal is achieved. It is necessary in order to stop social injustice and wrong destructive actions.

Adapted from The Dalai Lama on What Matters Most: Conversations on Anger, Compassion, and Action by Noriyuki Ueda. Reprinted with Permission from Hampton Roads Publishing.