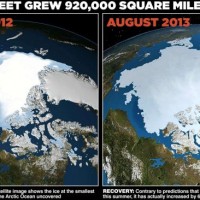 And now it’s global COOLING! Record return of Arctic ice cap as it grows by 60% in a year

A chilly Arctic summer has left nearly a million more square miles of ocean covered with ice than at the same time last year – an increase of 60 per cent.

The rebound from 2012’s record low comes six years after the BBC reported that global warming would leave the Arctic ice-free in summer by 2013.

Instead, days before the annual autumn re-freeze is due to begin, an unbroken ice sheet more than half the size of Europe already stretches from the Canadian islands to Russia’s northern shores.

The Northwest Passage from the Atlantic to the Pacific has remained blocked by pack-ice all year. More than 20 yachts that had planned to sail it have been left ice-bound and a cruise ship attempting the route was forced to turn back.

Some eminent scientists now believe the world is heading for a period of cooling that will not end until the middle of this century – a process that would expose computer forecasts of imminent catastrophic warming as dangerously misleading.

The disclosure comes 11 months after The Mail on Sunday triggered intense political and scientific debate by revealing that global warming has ‘paused’ since the beginning of 1997 – an event that the computer models used by climate experts failed to predict.

In March, this newspaper further revealed that temperatures are about to drop below the level that the models forecast with ‘90 per cent certainty’.

The pause – which has now been accepted as real by every major climate research centre – is important, because the models’ predictions of ever-increasing global temperatures have made many of the world’s economies divert billions of pounds into ‘green’ measures to counter  climate change.

THERE WON’T BE ANY ICE AT ALL! HOW THE BBC PREDICTED CHAOS IN 2007

Only six years ago, the BBC reported that the Arctic would be ice-free in summer by 2013, citing a scientist in the US who claimed this was a ‘conservative’ forecast. Perhaps it was their confidence that led more than 20 yachts to try to sail the Northwest Passage from the Atlantic to  the Pacific this summer. As of last week, all these vessels were stuck in the ice, some at the eastern end of the passage in Prince Regent Inlet, others further west at Cape Bathurst.

Shipping experts said the only way these vessels were likely to be freed was by the icebreakers of the Canadian coastguard. According to the official Canadian government website, the Northwest Passage has remained ice-bound and impassable  all summer.

The BBC’s 2007 report quoted scientist  Professor Wieslaw Maslowski, who based his views on super-computer models and the fact that ‘we use a high-resolution regional model for the Arctic Ocean and sea ice’.

He was confident his results were ‘much more realistic’ than other projections, which ‘underestimate the amount of heat delivered to the sea ice’. Also quoted was Cambridge University expert

Professor Peter Wadhams. He backed Professor Maslowski, saying his model was ‘more efficient’ than others because it ‘takes account of processes that happen internally in the ice’.

He added: ‘This is not a cycle; not just a fluctuation. In the end, it will all just melt away quite suddenly.’ The continuing furore caused by The Mail on Sunday’s revelations – which will now be amplified by the return of the Arctic ice sheet – has forced the UN’s climate change body to hold a crisis meeting.

The UN Intergovernmental Panel on Climate Change (IPCC) was due in October to start publishing its Fifth Assessment Report – a huge three-volume study issued every six or seven years. It will now hold a pre-summit in Stockholm later this month.

Leaked documents show that governments which support and finance the IPCC are demanding more than 1,500 changes to the report’s ‘summary for policymakers’. They say its current draft does not properly explain the pause.

At the heart of the row lie two questions: the extent to which temperatures will rise with carbon dioxide levels, as well as how much of the warming over the past 150 years – so far, just 0.8C – is down to human greenhouse gas emissions and how much is due to natural variability.

In its draft report, the IPCC says it is ‘95 per cent confident’ that global warming has been caused by humans – up from 90 per cent in 2007.

This claim is already hotly disputed. US climate expert Professor Judith Curry said last night: ‘In fact, the uncertainty is getting bigger. It’s now clear the models are way too sensitive to carbon dioxide. I cannot see any basis for the IPCC increasing its confidence level.’

She pointed to long-term cycles  in ocean temperature, which have a huge influence on climate and  suggest the world may be approaching a period similar to that from 1965 to 1975, when there was a clear cooling trend. This led some scientists at the time to forecast an imminent ice age.

Professor Anastasios Tsonis, of the University of Wisconsin, was one of the first to investigate the ocean cycles. He said: ‘We are already in a cooling trend, which I think will continue for the next 15 years at least. There is no doubt the warming of the 1980s and 1990s has stopped. ‘The IPCC claims its models show a pause of 15 years can be expected. But that means that after only a very few years more, they will have to admit they are wrong.’

Others are more cautious. Dr Ed Hawkins, of Reading University, drew the graph published by The Mail on Sunday in March showing how far world temperatures have diverged from computer predictions. He admitted the cycles may have caused some of the recorded warming, but insisted that natural variability alone could not explain all of the temperature rise over the past 150 years.

Nonetheless, the belief that summer Arctic ice is about to disappear remains an IPCC tenet, frequently flung in the face of critics who point to the pause.

Yet there is mounting evidence that Arctic ice levels are cyclical. Data uncovered by climate historians show that there was a massive melt in the 1920s and 1930s, followed by intense re-freezes that ended only in 1979 – the year the IPCC says that shrinking began.

Professor Curry said the ice’s behaviour over the next five years would be crucial, both for understanding the climate and for future policy. ‘Arctic sea ice is the indicator to watch,’ she said.