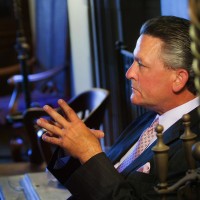 Dan Bubalo says he was told of deployment by source close to Ft. Hood

Venture capitalist Dan Bubalo claims he was told by a source close to Ft. Hood that US troops have been ordered to deploy to Syria. Writing for conservative columnist Mychal Massie’s website, Bubalo cites a “close and verifiable source” who told him that a friend at Ft. Hood had received news that he was to be sent to Egypt for the next nine months.

“This particular soldier said that while he was not really thrilled about the assignment to Egypt, it was better than the soldiers that remained at the military base BECAUSE THEY HAD JUST RECEIVED THEIR DEPLOYMENT ORDERS TO GO TO SYRIA,” writes Bubalo.

Noting that the development was “extremely troubling,” Bubalo added that it, “contradicts the posturing and false reassurances and table-pounding of Obama and Kerry.”

Bubalo claims the information was “sourced thoroughly,” but he received flak from some of the respondents in the comments below his article.

“I’m currently deployed and this article made me laugh,” wrote one respondent who claimed to be a Sergeant.

However, another alleged active duty soldier shot back, “It’s truth, a few of my fellow soldiers left last week…others are setting up to go this weekend.”

Dan Bubalo is a former brokerage firm owner and currently a venture capitalist and financial advisor on mergers and acquisitions. He has appeared as a guest on mainstream networks such as CNBC.

The White House has repeatedly insisted that there will be no “boots on the ground” in Syria, although Secretary of State John Kerry said he didn’t want to take the option off the table during testimony at a Senate Foreign Relations Committee last week.

In addition to CIA training of Syrian rebels which is already taking place in Jordan, the Obama administration is considering a new proposal to use the US military to train the opposition militants, despite their close links with terrorist groups like Jabhat al-Nusra.