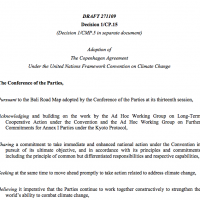 The Guardian reports that after only two days, “The UN Copenhagen climate talks are in disarray.” The problem is a leaked document that Denmark hoped that world leaders would sign at the end of next week. The text “hands more power to rich countries and sidelines the UN’s role in all future climate change negotiations,” John Vidal writes in The Guardian.

The text was developed by a small group of countries, including the UK, US, Australia and Denmark, and was shown only to a handful of countries after being completed last week. The Guardian has posted the “Danish text” on its website.

“This was an informal paper ahead of the conference given to a number of people for the purposes of consultations. The only formal texts in the UN process are the ones tabled by the Chairs of this Copenhagen conference at the behest of the Parties.”

The Danish Ministry of Climate and Energy was also keen to keep its head in the sand:

“In this kind of process, many different working papers are circulated amongst many different parties with their hands on the process. These papers are the basis for informal consultations that contribute with input used for testing various positions. Therefore, many papers exist. That is quite normal.”

Of course this is not a formal text, but it is clearly a text that its authors hoped would be signed in Copenhagen (or heavily influence whatever is signed). It was produced outside the UN process, but coordinated by the Danish government, the hosts of COP-15. The aim of the text is to get a non-binding, political deal in Copenhagen. The “Danish text” states:

The Conference of the Parties,
[. . . ]
Affirming the need to continue negotiations pursuant to decisions taken at COP13 and COP15, with a view to agreeing on a comprehensive legal framework under the Convention no later than COPXX
Decides to adopt this political agreement (hereinafter “the Copenhagen Agreement”), which will become effective immediately.

NGOs reacted furiously to the news that Denmark was working on a text before the UN meeting even started. In a statement, they said:

We criticize the Danish Prime Minister’s decision to produce draft “Copenhagen Accords” before the meeting has even started. These have been circulated to a select few governments, excluding others. They have been produced in spite of on-going negotiations under the UNFCCC and prejudge the outcome of good-faith negotiations among all Parties.

We further criticize the texts on the basis that they systematically ignore the demands of developing countries and overwhelmingly reflect the position of Denmark and other developed countries on key issues. They seek to shift the burden of addressing climate change from those who caused it to those who suffer its worst effects.

We criticize the Danish Prime Minister’s consistent disregard for the concerns of developing countries by downgrading expectations for Copenhagen to a “political agreement” and by falsely stating that the Kyoto Protocol ends in 2012.

G77 wasn’t particularly happy either. The text is a “serious violation that threatens the success of the Copenhagen negotiating process,” Sudan’s Lumumba Stanislas Dia Ping, the head of G77, said.

“The G77 members will not walk out of this negotiation at this late hour because we can’t afford a failure in Copenhagen. However, we will not sign an inequitable deal. We can’t accept a deal that condemns 80 percent of the world population to further suffering and injustice.”

So here’s what the “Danish Text” says on REDD:

Reducing emissions from deforestation and forest degradation
12. Reducing emissions from deforestation and forest degradation is an important aspect of the necessary response to climate change. Developing countries should contribute to enhanced mitigation actions through reducing emissions from deforestation and forest degradation, maintaining existing and enhancing carbon stocks, and enhancing removals by increasing forest cover. Parties underline the importance of enhanced and sustained financial resources and positive incentives for developing countries to, through a series of phases, build capacity and undertake actions that result in measurable, reportable and verifiable greenhouse gas emission reductions and removal and changes in forest carbon stocks in relation to reference emission levels. Parties collectively endorse the framework in Decision X/CP.15, with the aim of stabilizing forest cover in developing countries by [X] and reducing gross deforestation in developing countries by at least [XX]% by [2020] compared to current levels.

The “Danish Text” will change – it’s dated 27 November 2009 and more discussions have taken place since then. But as it stands, this is more or less everything that’s wrong with REDD in one paragraph. Forests are reduced to sticks of carbon. Monitoring is reduced to monitoring the amount of carbon stored in the forests. There is no attempt to differentiate between forests and industrial tree plantations. In this context, “increasing forest cover” allows old-growth forest to be replaced by monocultures. There is no mention of any safeguards. Indigenous Peoples? Not mentioned. Biodiversity? No. The importance of protecting intact natural forests? No. Land rights? No. Complaints mechanism? No. Additionality? No. Permanence? No. Leakage? No. The North’s role in driving deforestation through overconsumption? Of course not, no. Obviously, all these things could be addressed elsewhere, but so far they haven’t been and there is little evidence that they will be.

While the “Danish Text” ignores the risks to Indigenous Peoples and local communities it is (not surprisingly) in favour of carbon markets:

Carbon markets
14. An effective mitigation response requires a well functioning carbon market. Carbon markets have the potential to deliver significant mutual benefits to developed and developing countries in terms of both on-the-ground investment and environmental and energy security co-benefits. The Parties will work towards an effective and orderly transition from project based to more comprehensive approaches. They will also improve the existing project based carbon market mechanism in order to ensure the environmental integrity and further underpin a broad and liquid carbon market. [In this regard, the Parties endorse decision X3/CP.15 and X2/CMP.5.]

Anyone else think that a “broad and liquid carbon market” sounds like an invitation to Goldman Sachs et al to develop a brand new sub-prime carbon bubble?