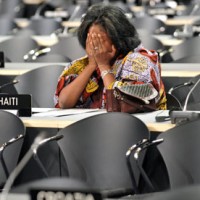 • Read the ‚Danish text‘
• Video: behind the scenes at Copenhagen 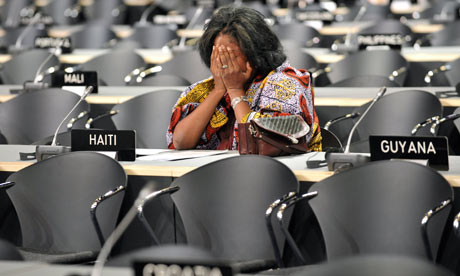 The UN Copenhagen climate talks are in disarray today after developing countries reacted furiously to leaked documents that show world leaders will next week be asked to sign an agreement that hands more power to rich countries and sidelines the UN’s role in all future climate change negotiations.

The so-called Danish text, a secret draft agreement worked on by a group of individuals known as „the circle of commitment“ – but understood to include the UK, US and Denmark – has only been shown to a handful of countries since it was finalised this week.

The agreement, leaked to the Guardian, is a departure from the Kyoto protocol’s principle that rich nations, which have emitted the bulk of the CO2, should take on firm and binding commitments to reduce greenhouse gases, while poorer nations were not compelled to act. The draft hands effective control of climate change finance to the World Bank; would abandon the Kyoto protocol – the only legally binding treaty that the world has on emissions reductions; and would make any money to help poor countries adapt to climate change dependent on them taking a range of actions.

The document was described last night by one senior diplomat as „a very dangerous document for developing countries. It is a fundamental reworking of the UN balance of obligations. It is to be superimposed without discussion on the talks“.

A confidential analysis of the text by developing countries also seen by the Guardian shows deep unease over details of the text. In particular, it is understood to:

• Force developing countries to agree to specific emission cuts and measures that were not part of the original UN agreement;

• Divide poor countries further by creating a new category of developing countries called „the most vulnerable“;

Developing countries that have seen the text are understood to be furious that it is being promoted by rich countries without their knowledge and without discussion in the negotiations.

„It is being done in secret. Clearly the intention is to get [Barack] Obama and the leaders of other rich countries to muscle it through when they arrive next week. It effectively is the end of the UN process,“ said one diplomat, who asked to remain nameless.

Antonio Hill, climate policy adviser for Oxfam International, said: „This is only a draft but it highlights the risk that when the big countries come together, the small ones get hurting. On every count the emission cuts need to be scaled up. It allows too many loopholes and does not suggest anything like the 40% cuts that science is saying is needed.“

Hill continued: „It proposes a green fund to be run by a board but the big risk is that it will run by the World Bank and the Global Environment Facility [a partnership of 10 agencies including the World Bank and the UN Environment Programme] and not the UN. That would be a step backwards, and it tries to put constraints on developing countries when none were negotiated in earlier UN climate talks.“

The text was intended by Denmark and rich countries to be a working framework, which would be adapted by countries over the next week. It is particularly inflammatory because it sidelines the UN negotiating process and suggests that rich countries are desperate for world leaders to have a text to work from when they arrive next week.

Few numbers or figures are included in the text because these would be filled in later by world leaders. However, it seeks to hold temperature rises to 2C and mentions the sum of $10bn a year to help poor countries adapt to climate change from 2012-15.