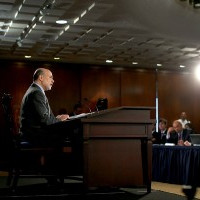 In Surprise, Fed Decides to Maintain Pace of Stimulus

WASHINGTON — It turns out that the Federal Reserve is not quite ready to let go of its extra efforts to help the economy grow.

Esther George, president of the Federal Reserve Bank of Kansas City, was the lone dissenter, citing concerns about inflation.

All summer, Federal Reserve officials said flattering things about the economy’s performance: how strong it looked, how well it was recovering, how eager they were to step back and watch it walk on its own.

But, in a reversal that stunned economists and investors on Wall Street, the Fed said on Wednesday that it would postpone any retreat from its monetary stimulus campaign for at least another month and quite possibly until next year. The Fed’s chairman, Ben S. Bernanke, emphasized that economic conditions were improving. But he said that the Fed still feared a turn for the worse.

He noted that Congressional Republicans and the White House were hurtling toward an impasse over government spending. That was reinforced on Wednesday, when House leaders said they would seek to pass a federal budget stripping all financing for President Obama’s signature health care law, increasing the chances of a government shutdown.

And the Fed undermined its own efforts when it declared in June that it intended to begin a retreat by the end of the year, causing investors to immediately begin to demand higher interest rates on mortgage loans and other financial products, a trend that the Fed said Wednesday was threatening to slow the economy.

“We have been overoptimistic,” Mr. Bernanke said at a news conference Wednesday. The Fed, he said, is “avoiding a tightening until we can be comfortable that the economy is in fact growing the way that we want it to be growing.”

Investors cheered the Fed’s hesitation. The Standard & Poor’s 500 stock-index rose 1.22 percent, to close at a record high, in nominal terms. Interest rates also fell; the yield on the benchmark 10-year Treasury reversed some of its recent rise.

Some analysts, however, warned that the unexpected announcement was likely to worsen confusion about the Fed’s plans, increasing the volatility of the markets in the coming months as investors sort through the Fed’s mixed messages about how much longer it plans to continue its bond-buying campaign. The delay also means that the decision to retreat may ultimately be made by the next Fed chairman, after Mr. Bernanke steps down at the end of January. President Obama has said that he plans to nominate a replacement as soon as next week. Janet L. Yellen, the Fed’s vice chairman, is the leading candidate.

“The cost of not setting out on a default gradual glide path for completing QE3 today is that this issue is now likely to be front and center in the nomination and confirmation process for the new Fed chair,” wrote Krishna Guha, head of central bank strategy at the financial services firm International Strategy & Investment, referring to the Fed’s asset purchases of quantitative easing.

The Fed unrolled an aggressive combination of new policies last year in an effort to encourage a housing recovery and increase the pace of job creation. It started adding $85 billion a month to its holdings of Treasury securities and mortgage-backed securities, to help keep long-term borrowing costs down and said it planned to keep buying until the outlook for the labor market improved substantially. The Fed also said it would keep short-term rates near zero for even longer — at least as long as the unemployment rate remained above 6.5 percent.

Half a year later, in June, Mr. Bernanke surprised many investors by announcing that the Fed intended to start cutting back on those asset purchases by the end of 2013. Fed officials reiterated that intention in July, and several officials had since suggested that the Fed might begin to pull back at the September meeting. It is also scheduled to meet next month and in mid-December.

Some critics question the Fed’s assessment of the economy, in particular its claim that a declining unemployment rate is a sign of progress. They note that unemployment is falling in part because fewer people are looking for work, and therefore are no longer officially counted as unemployed.

The Fed now appears to be giving that argument greater credence, and on Wednesday Mr. Bernanke played down the Fed’s earlier use of unemployment rate thresholds to describe the goals for its policies. He refused to repeat a comment he had made in June that the Fed planned to keep buying bonds until the unemployment rate reached roughly 7 percent. He also emphasized that the Fed was likely to keep short-term rates near zero well after unemployment fell below 6.5 percent, the threshold the Fed had established last year.

The Fed’s concern, he suggested, is that things could get worse, either because of new cuts in federal spending, a political impasse in Washington over fiscal matters that threatened to undermine the economy, or because the Fed pulled back prematurely.

Fiscal policy “is restraining economic growth,” the Fed said in a statement after a regular two-day meeting of the Federal Open Market Committee. It added, “The tightening of financial conditions observed in recent months, if sustained, could slow the pace of improvement in the economy and the labor market.”

Mr. Bernanke sought to explain the Fed’s hesitation in more detail. He said the Fed wanted to see three things: Evidence that the drag from fiscal policy is diminishing, that inflation is returning to a healthy level, and that job growth is sustainable.

“If it does,” he said, “we’ll take the first step at some point, possibly later this year.”

The decision was supported by nine of the 10 voting members of the Federal Open Market Committee. Esther George, president of the Federal Reserve Bank of Kansas City, dissented as she has at each previous meeting this year, citing concerns about inflation and financial stability. The committee was short two members, because of the retirement of former governor Elizabeth A. Duke and the recusal of governor Sarah Bloom Raskin, nominated to be deputy Treasury secretary.

In their economic forecasts, also published Wednesday, Fed officials retreated from overly optimistic predictions about the pace of growth over the next several years, as they have done repeatedly since the end of the recession. The aggregation of forecasts showed that Fed officials now expect growth to remain sluggish for years to come, with persistent unemployment and little inflation.

While the Fed postponed its retreat, interest rates remained higher than before it started talking about tapering, in the United States, Europe and emerging markets. The Fed statements then “effectively brought monetary tightening forward in time,” the Bank for International Settlements in Basel, Switzerland, a clearinghouse for central banks worldwide, said in its quarterly report this week.

Investors who put their money into countries like China or Brazil in search of higher returns have been withdrawing it as investment opportunities improve in the United States. That outflow of wealth is also bad for export-driven economies like Germany. Foreign orders for German machinery fell 9 percent in July from a year earlier, according to the German Engineering Federation, an industry group.

In an attempt to soften the market reaction, the European Central Bank has promised to keep its benchmark interest rate at a record low indefinitely. But analysts say it is unlikely that words alone will be enough to keep rates low.

“We are going to be confronted with this situation more and more often,” Mr. Reithofer said.