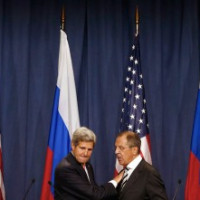 GENEVA — The United States and Russia have reached an agreement that calls for Syria’s arsenal of chemical weapons to be removed or destroyed by the middle of 2014, Secretary of State John Kerry said on Saturday.

Under a “framework” agreement, international inspectors must be on the ground in Syria by November, Mr. Kerry said, speaking at a news conference with the Russian Foreign Minister, Sergey V. Lavrov.

An immediate test of the viability of the accord will come within a week when the Syrian government is to provide a “comprehensive listing” of its chemical stockpile.

“The real final responsibility here is Syrian,” a senior administration official said of the deal.

Security will be a major worry for the inspectors who are tasked with implementing the agreement; no precedent exists for inspection, removal and destruction of a large chemical weapons stockpile during a raging civil war. Mr. Lavrov said the agreement would require the cooperation of Syrian rebels and not just the government of President Bashar al-Assad. Much of the Syrian opposition is bitter about President Obama’s decision to shelve the threat of military action and to negotiate with Russia, which is a major arms supplier to the Assad government.

At the news conference, Mr. Kerry said that “if fully implemented, this framework can provide greater protection and security to the world.”

If Mr. Assad fails to comply with the agreement, the issue will be referred to the United Nations Security Council.

Mr. Kerry said that any violations would then be taken up under Chapter 7 of the United Nations Charter, which authorizes punitive action. But Mr. Lavrov made clear that Russia, which wields a veto in the Security Council, had not withdrawn its objections to the use of force.

The joint announcement, which took place on the third day of intensive talks here, eased the United States’ confrontation with Syria.

Arms control officials on both sides worked into the night, a process that recalled the treaty negotiations during the cold war.

The issue of removing Syria’s chemical arms broke into the open on Monday when Mr. Kerry, at a news conference in London, posed the question as to whether Mr. Assad could rapidly be disarmed only to state that he did not see how it could be done.

“He could turn over every single bit of his chemical weapons to the international community in the next week. Turn it over, all of it, without delay, and allow a full and total accounting for that,” Mr. Kerry said. “But he isn’t about to do it, and it can’t be done, obviously.”

Now, however, what once seemed impossible has become the plan — one that will depend on Mr. Assad’s cooperation and that will need to be put in place in the middle of a civil war.

Mr. Kerry and Mr. Lavrov had a series of meeting on Friday, including a session that ended at midnight. On Saturday morning, the two sides reconvened with their arms-controls experts on the hotel pool deck, sitting under a white umbrella drinking coffee as they pored over the text of the agreement.

Before the news conference, Mr. Lavrov said that he had not spoken with Syrian officials while he was negotiating in Geneva. Obama administration officials say that Russia’s role was critical since it has been a major backer of the Assad government.

Titled “Framework For Elimination of Syrian Chemical Weapons,” the agreement is four pages, including its technical annexes. The agreement, which outlines procedures for “expeditious destruction of the Syrian chemical weapons program and stringent verification,” says that the United States and Russia will submit a plan in the next several days to the Organization for the Prohibition of Chemical Weapons, which oversees compliance with the chemical weapons accord.

The document also says that there is to be “complete elimination of all chemical weapons material and equipment in the first half of 2014.”

The framework agreement and the annexes are to be incorporated in a United Nations Security Council resolution that is to be adopted New York. A senior administration official said the schedule outlined in the documents “is daunting, to say the least.” The agreement notes that the United States and Russia have reached a “shared assessment” on the amount and the type of chemical weapons involved, “and are committed to the immediate international control over chemical weapons and their components in Syria.”

An American official, who could not be identified under the diplomatic protocol established by the State Department, said that United States and Russia had agreed that Syria has 1,000 metric tons of chemical weapons, including Sarin and mustard gas.

The two sides, however, have not yet agreed on the number of chemical weapons sites.

The difference over the number the sites appears to reflect the larger disagreement as to who was responsible for an Aug. 21 attack that the United States says killed at least 1,400 civilians, many of them women and children.

If the Russians were to agree on the number of chemical weapons sites, the fact that, as American officials believe, the sites are all in government control areas, that would suggest that the Assad government was culpable for the attack and not the rebel forces as the Russians have asserted.

The United States believes there are at least 45 chemical weapons sites in Syria. Nearly half of these have “exploitable quantities” of chemical weapons, though the American official says that some of the agents may have been moved by the Assad government. The American official said there was no indication that any of Syria’s chemical stocks had been moved to Iraq or Lebanon, as the Syrian opposition had charged.

“We believe they are under regime control,” the American official said.

In his weekly address before the deal was announced, Mr. Obama called the Russian peace initiative and subsequent discussions “positive developments” that could ultimately avert an American military strike in retaliation for the gas attack.

“If the current discussions produce a serious plan, I’m prepared to move forward with it,” Mr. Obama said in his weekly radio and Internet address. “But we are not just going to take Russia and Assad’s word for it. We need to see concrete actions to demonstrate that Assad is serious about giving up his chemical weapons.” Just to be sure, he said he would keep American destroyers and other forces in the region for a possible punitive strike.

A priority in the agreement reached Saturday is to take steps to preclude or diminish the Assad government’s ability to employ chemical weapons before they are destroyed.

An American official said that such steps could include burning the least volatile component of binary weapons, a type of chemical arm that that becomes potent when the elements are mixes. Another way to disable at least part of Syria’s stockpile, the official said, is to destroy the equipment for mixing the binary component or destroying the munitions or bombs that would be filed with chemical agents.

Yet another option, officials said, was to remove the arsenal to a third country that would destroy the stocks. The United States and Russia have installations that are capable of doing this. Or, equipment to destroy the stocks could be brought to Syria.

Another obstacle in the process could be response of the Syrian rebels.

At a Saturday news conference in Istanbul, Gen. Salim Idris, the nominal commander of the Free Syrian Army, said that the rebels would not agree to a cease-fire and would fight on.

“You cannot allow the murderer to get away with murder,” General Idris said. “The chemical weapons agreement is between the international community and the regime”

A report by United Nations inspectors set to be released in the coming days will be “overwhelming” in its conclusion that chemical weapons were used, Ban Ki-moon, the secretary general, said Friday.

Mr. Ban, in comments that he thought were private but that were inadvertently broadcast over an in-house United Nations television channel, said that Mr. Assad had “committed many crimes against humanity” during more than two years of civil war and that there would be a “process of accountability when everything is over.” Mr. Ban said he was “troubled” that the Security Council had not adopted any response, calling it “failure by the United Nations.”

Fighting raged across Syria on Friday as antigovernment activists reported shelling in or around nearly every major city. The death toll was reported by activists to be 22 by nightfall, small compared with that of many recent days. But artillery barrages and government warplane sorties went on all day, including clashes in Yarmouk Camp, a contested area home to many Palestinian refugees southeast of the Syrian capital, Damascus.

As deliberations continued in Geneva, Mr. Kerry’s aides announced that he would travel to other capitals to consult with allies. On Sunday, he will fly to Jerusalem to meet with Benjamin Netanyahu, the Israeli prime minister. Mr. Obama’s decision to defer military action to pursue the Russian initiative has stirred concern in Israel about the credibility of American policy toward Iran and its nuclear program.

After Jerusalem, Mr. Kerry plans to meet on Monday in Paris with the foreign ministers of America’s two principal allies on Syria, Laurent Fabius of France and William Hague of Britain.

After Russia this week proposed averting an American strike by having Syria give up its chemical weapons, Mr. Fabius proposed enforcing such a deal with a Security Council resolution invoking Chapter 7, a clause that allows United Nations members to use military action to enforce its provisions.

While in Paris, Mr. Kerry will also meet with Saud al-Faisal, the foreign minister of Saudi Arabia, which has been a strong supporter of the anti-Assad Syrian opposition and an advocate of taking tough action after the Aug. 21 chemical weapons attack.