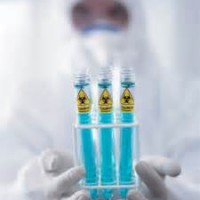 U. S., Canada, France, and U. K. implicated in Ebola tests

Scientists allege deadly diseases such as Ebola and AIDS are bio weapons being tested on Africans. Other reports have linked the Ebola virus outbreak to an attempt to reduce Africa’s population. Liberia happens to be the continents’s fastest growing population.

I have read a number of articles from your Internet outreach as well as articles from other sources about the casualties in Liberia and other West African countries about the human devastation caused by the Ebola virus. About a week ago, I read an article published in the Internet news summary publication of the Friends of Liberia that said that there was an agreement that the initiation of the Ebola outbreak in West Africa was due to the contact of a two-year old child with bats that had flown in from the Congo. That report made me disconcerted with the reporting about Ebola, and it stimulated a response to the “Friends of Liberia,” saying that African people are not ignorant and gullible, as is being implicated. A response from Dr. Verlon Stone said that the article was not theirs, and that “Friends of Liberia” was simply providing a service. He then asked if he could publish my letter in their Internet forum. I gave my permission, but I have not seen it published. Because of the widespread loss of life, fear, physiological trauma, and despair among Liberians and other West African citizens, it is incumbent that I make a contribution to the resolution of this devastating situation, which may continue to recur, if it is not properly and adequately confronted. I will address the situation in five (5) points:

Horowitz (1998) was deliberate and unambiguous when he explained the threat of new diseases in his text, Emerging Viruses: AIDS and Ebola – Nature, Accident or Intentional. In his interview with Dr. Robert Strecker in Chapter 7, the discussion, in the early 1970s, made it obvious that the war was between countries that hosted the KGB and the CIA, and the ‘manufacture’ of ‘AIDS-Like Viruses’ was clearly directed at the other. In passing during the Interview, mention was made of Fort Detrick, “the Ebola Building,” and ‘a lot of problems with strange illnesses’ in “Frederick [Maryland].” By Chapter 12 in his text, he had confirmed the existence of an American Military-Medical-Industry that conducts biological weapons tests under the guise of administering vaccinations to control diseases and improve the health of “black Africans overseas.” The book is an excellent text, and all leaders plus anyone who has interest in science, health, people, and intrigue should study it. I am amazed that African leaders are making no acknowledgements or reference to these documents.

2. EBOLA HAS A TERRIBLE HISTORY, AND TESTING HAS BEEN SECRETLY TAKING PLACE IN AFRICA

I am now reading The Hot Zone, a novel, by Richard Preston (copyrighted 1989 and 1994); it is heart-rending. The prolific and prominent writer, Steven King, is quoted as saying that the book is “One of the most horrifying things I have ever read. What a remarkable piece of work.” As a New York Times bestseller, The Hot Zone is presented as “A terrifying true story.” Terrifying, yes, because the pathological description of what was found in animals killed by the Ebola virus is what the virus has been doing to citizens of Guinea, Sierra Leone and Liberia in its most recent outbreak: Ebola virus destroys peoples’ internal organs and the body deteriorates rapidly after death. It softens and the tissues turn into jelly, even if it is refrigerated to keep it cold. Spontaneous liquefaction is what happens to the body of people killed by the Ebola virus! The author noted in Point 1, Dr. Horowitz, chides The Hot Zone for writing to be politically correct; I understand because his book makes every effort to be very factual. The 1976 Ebola incident in Zaire, during President Mobutu Sese Seko, was the introduction of the GMO Ebola to Africa.

3. SITES AROUND AFRICA, AND IN WEST AFRICA, HAVE OVER THE YEARS BEEN SET UP FOR TESTING EMERGING DISEASES, ESPECIALLY EBOLA

The World Health Organization (WHO) and several other UN Agencies have been implicated in selecting and enticing African countries to participate in the testing events, promoting vaccinations, but pursuing various testing regiments. The August 2, 2014 article, West Africa: What are US Biological Warfare Researchers Doing in the Ebola Zone? by Jon Rappoport of Global Research pinpoints the problem that is facing African governments.

Obvious in this and other reports are, among others:

(a) The US Army Medical Research Institute of Infectious Diseases (USAMRIID), a well-known centre for bio-war research, located at Fort Detrick, Maryland;

(b) Tulane University, in New Orleans, USA, winner of research grants, including a grant of more than $7 million the National Institute of Health (NIH) to fund research with the Lassa viral hemorrhagic fever;

(c) the US Center for Disease Control (CDC);

(f) The UK’s GlaxoSmithKline; and

Reports narrate stories of the US Department of Defense (DoD) funding Ebola trials on humans, trials which started just weeks before the Ebola outbreak in Guinea and Sierra Leone. The reports continue and state that the DoD gave a contract worth $140 million dollars to Tekmira, a Canadian pharmaceutical company, to conduct Ebola research. This research work involved injecting and infusing healthy humans with the deadly Ebola virus. Hence, the DoD is listed as a collaborator in a “First in Human” Ebola clinical trial (NCT02041715, which started in January 2014 shortly before an Ebola epidemic was declared in West Africa in March. Disturbingly, many reports also conclude that the US government has a viral fever bioterrorism research laboratory in Kenema, a town at the epicentre of the Ebola outbreak in West Africa. The only relevant positive and ethical olive-branch seen in all of my reading is that Theguardian.com reported, “The US government funding of Ebola trials on healthy humans comes amid warnings by top scientists in Harvard and Yale that such virus experiments risk triggering a worldwide pandemic.” That threat still persists.

4. THE NEED FOR LEGAL ACTION TO OBTAIN REDRESS FOR DAMAGES INCURRED DUE TO THE PERPETUATION OF INJUSTICE IN THE DEATH, INJURY AND TRAUMA IMPOSED ON LIBERIANS AND OTHER AFRICANS BY THE EBOLA AND OTHER DISEASE AGENTS.

The U. S., Canada, France, and the U. K. are all implicated in the detestable and devilish deeds that these Ebola tests are. There is the need to pursue criminal and civil redress for damages, and African countries and people should secure legal representation to seek damages from these countries, some corporations, and the United Nations. Evidence seems abundant against Tulane University, and suits should start there. Yoichi Shimatsu’s article, The Ebola Breakout Coincided with UN Vaccine Campaigns, as published on August 18, 2014, in the Liberty Beacon.

5. AFRICAN LEADERS AND AFRICAN COUNTRIES NEED TO TAKE THE LEAD IN DEFENDING BABIES, CHILDREN, AFRICAN WOMEN, AFRICAN MEN, AND THE ELDERLY. THESE CITIZENS DO NOT DESERVE TO BE USED AS GUINEA PIGS!

Africa must not relegate the Continent to become the locality for disposal and the deposition of hazardous chemicals, dangerous drugs, and chemical or biological agents of emerging diseases. There is urgent need for affirmative action in protecting the less affluent of poorer countries, especially African citizens, whose countries are not as scientifically and industrially endowed as the United States and most Western countries, sources of most viral or bacterial GMOs that are strategically designed as biological weapons. It is most disturbing that the U. S. Government has been operating a viral hemorrhagic fever bioterrorism research laboratory in Sierra Leone. Are there others? Wherever they exist, it is time to terminate them. If any other sites exist, it is advisable to follow the delayed but essential step: Sierra Leone closed the US bioweapons lab and stopped Tulane University for further testing.

The world must be alarmed. All Africans, Americans, Europeans, Middle Easterners, Asians, and people from every conclave on Earth should be astonished. African people, notably citizens more particularly of Liberia, Guinea and Sierra Leone are victimized and are dying every day. Listen to the people who distrust the hospitals, who cannot shake hands, hug their relatives and friends. Innocent people are dying, and they need our help. The countries are poor and cannot afford the whole lot of personal protection equipment (PPE) that the situation requires. The threat is real, and it is larger than a few African countries. The challenge is global, and we request assistance from everywhere, including China, Japan, Australia, India, Germany, Italy, and even kind-hearted people in the U.S., France, the U.K., Russia, Korea, Saudi Arabia, and anywhere else whose desire is to help. The situation is bleaker than we on the outside can imagine, and we must provide assistance however we can. To ensure a future that has less of this kind of drama, it is important that we now demand that our leaders and governments be honest, transparent, fair, and productively engaged. They must answer to the people. Please stand up to stop Ebola testing and the spread of this dastardly disease.

Thank you very much.

Dr. Broderick is a former professor of Plant Pathology at the University of Liberia’s College of Agriculture and Forestry. He is also the former Observer Farmer in the 1980s. It was from this column in our newspaper, the Daily Observer, that Firestone spotted him and offered him the position of Director of Research in the late 1980s. In addition, he is a scientist, who has taught for many years at the Agricultural College of the University of Delaware.